Instead of writing a complicated OnLoad rule to add default values to the questionnaire, it is now possible to set the default in the question editor. The default value can be a constant, or in a few most common scenarios a field whose value is fetched for you. 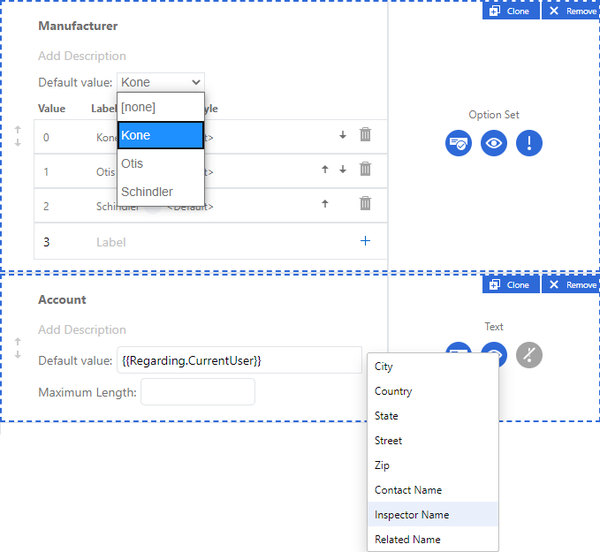 In the case of numeric questions and option sets, you can now simply add a specific style to the values that are answered.

Make the template stand out in the Questionnaire Designer, as well as in the application, by adding a custom icon to the template.

A new static question type has been added where the user can add a logo on top of the questionnaire template. This logo is automatically reused in the Automatic Report as a header.

New, sleeker, and more intuitive design of all question types in the Questionnaire Designer.

You can now use the Schedule Board to assign a questionnaire template to a specific user when scheduling an appointment. Edit a task and switch to the new Inspections tab. 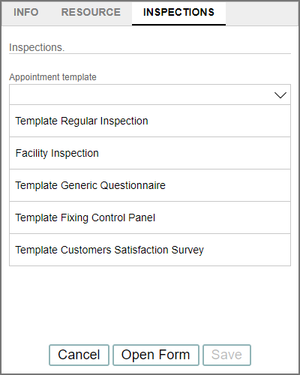 The Schedule Board now has a new map view where you can see all the scheduled appointments on the map.

You can now use fetch variable Template:Regarding to access (related) entity of activity, if the activity is regarding record of questionnaire in the Reuse answers filter. For example, this can mean that you can reuse previous answers from a specific Account, or a specific Asset, even if opened through Appointment. See Reuse questionnaire answers from related records.

The functionality of doing the inspections in a holographic 3D scene is with the ARKit now available also for the iOS devices. Inspectors can now open the holographic scene on an iPhone/iPad instead of going through the standard questionnaire. Instead of attaching photos to the individual questions or topic groups – inspectors can now go the other way round – to answer the questions directly in the 3D scene and tagging each onto the relevant object. This is done through spatial anchors. The image of the so-called “tagged scene” is then added to the questionnaire and its report. 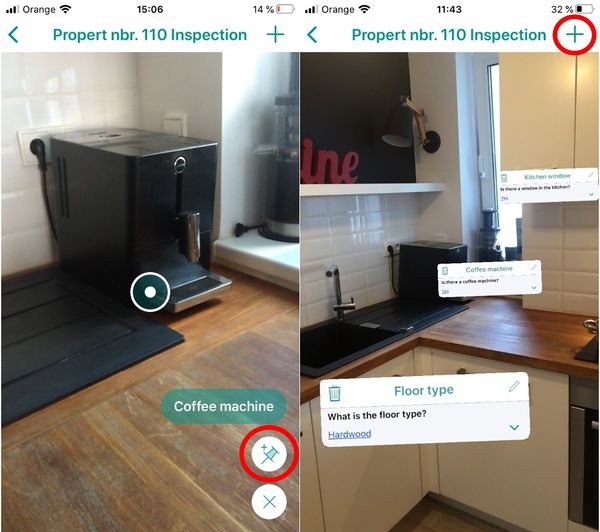 On mobile devices, the real estate of the screen is limited and vast empty spaces in apps can feel like a waste. Especially for business users, who’d often prefer to view key information (e.g. contact’s name, address, email, phone, parent account, last visit date & details, etc.) in one place, without the need to scroll extensively.

That’s why we are introducing a new Form Table designer in Woodford that allows to visually position elements on the screen into highly customized layouts. On form tabs, Resco enables to create tables consisting of various form elements (fields), with up to 20x20 rows and columns. Each row and column’s width can be easily adjusted. Furthermore, each added form element can be flexibly stretched spanning one or multiple cells in one or multiple rows and columns. Ultimately, the new Form Table designer enables admins to easily create layouts that take advantage of any screen size and eliminate extensive scrolling for users to access vital information.

From a young age, we’re all taught not to sign anything until we’ve properly read the entire document. Whether signing an insurance claim assessment or a simple invoice – people like to see what they sign before they put pen to paper.

Up until now, when mobile reports required a digital signature, it needed to be captured before the final PDF has been created. With the Spring Update, in any Resco app, digital signatures can be added after the report has been finalized - a signature pad and (an optional) comment section will be displayed underneath the document.

For those utilizing Power BI, Resco has further enhanced its integration with Microsoft’s business intelligence tool. Previously, when accessing Power BI from the Resco app, users needed to enter their Power BI credentials when opening a new iframe displaying Power BI dashboards. From now on, they can access any number of Power BI iframes within one app session without having to enter their login details repeatedly for each.

A record in the system rarely “lives” on its own. E.g., an account provides only some information and there can be contact, order, task or any other records related to it. These related records can be created, modified, or deleted and these events often need to be reflected on the parent record (account, in our example).

Therefore, in the Spring update, we added the possibility to utilize the OnChange rule when changes occur on related records – so that these changes are immediately reflected on the parent account if required. For example, an account contains information on the total value of its related orders (Total Order Value field). When a new order – related to this account - is created, the OnChange rule will be triggered and the new order’s value will be automatically added to the account’s Total Order Value field.

To enable this event, go to the properties of an associated list, switch to the Properties tab and enable Controls > Trigger OnChange event.

Multimedia actions – such as capturing a photo, recording a video, etc. – have been available on a form’s Media tab up until this point. Now, users can also access them directly from the form’s Image Detail item – which makes adding images, videos, or audio even faster. The allowed actions available on a form image are configured on the image Properties pane.

When capturing profile pictures, it is often necessary to crop the photo to remove parts of the background and let the face stand out. To streamline the process and achieve this with as little clicks as possible, it is now possible to run the Crop photo command automatically after the picture has been taken. Regardless if the action is executed from the Media tab or a list of photos, it is also possible to set up the aspect ratio and automatic photo resizing. Saves tons of time especially when capturing many profile pictures!

If background synchronization is running and the user clicks either on Setup or tries to exit the app, a popup appears asking whether the user wants to abort the currently running sync. If so, the sync is aborted to prevent long waiting times in longer synchronizations.

The change of local database page size to 4K has a significant impact on the speed of local data operations: database speed (both read/write) is improved by 30-40% on all platforms. For existing users, this will be applied after the next Delete Data action.

(Dynamics only) In Woodford, admins can finally set up a combination of roles and business units when defining app project properties. This means that there can be a different app project for users from different business units, but with the same roles.

It is now possible to use parent > child relationships in online mode with Salesforce backend, e.g., you can sync only Service Appointments where the current user is among Assigned Resources. However, due to SOQL limitations, some limitations apply to Sync Filters and View Filters executed in online mode:

If you have ever needed to quickly switch between different environments in your Resco app (e.g. development, testing, production, or between one account and another), the App Folder feature allows precisely that. Create local folders for application data, so that you can have separate logins in separate folders. And now, you can easily switch between the existing folders via the folder list.

This new feature provides the ability to add text formatting options (e.g. bold or italic) into a text field. The formatting is then available in the Resco app in a field on a form. User can see the formatted text as well as add the formatting. Ultimately, the result is stored in HTML format in the field.