Resco Academy has a course on a similar subject:
Business Logic 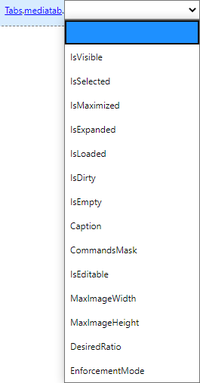 Some of the variables for form fields are universal:

Other depend on the field type:

Each variable data type will have a different set of functions. See the table for details.

Conditions allow you to specify when (under which conditions) a set of steps will be executed. A condition is a part of a rule, where you test a variable against a value and act in one way if the condition is met by the variable or another way if not. Conditions always evaluate to true or false. You can chain conditions using AND and OR logical operators.

Use to evaluate conditions related to a user, app, and device.

Configuration.roles allow you to modify the behavior of the app depending on the user role. For example, you can make a form read-only for certain security roles or enable a specific command only for a certain role. Use the Contains operator with roles, and specify either the name or the ID of the security role.

IsLoaded property checks whether the form or questionnaire is fully loaded and visible on the screen, with all the values assigned. For example, you can use it to differentiate between the initial loading of a form and manual user change.

Relationship allows you to determine from where a particular form/view/questionnaire opens. However, a relationship has to exist between the two records. Depending on whether the lookup relationship is on the original record or the destination record, either source or target is populated.

In the case of questionnaires:

The relationship sourceUIElement is the tab name of the associated view from which you open a related record.

Once the variable has been initialized, you can use it in other steps and conditions.

StringList is a special type of variable that you can define. It represents an array or list of string variables. It has only a limited set of operations available.

To populate a StringList variable, you can either assign it a different string list or add strings using the AddItem step.

To work with the content of the array, use the Element At operation and specify the index of the string in the array.

The rules include three asynchronous operations:

Additionally, when we use the Assign operation to add a lookup to an entity, this behaves like LoadReference.

Asynchronous operations cannot be used in the following rules: