The Resco platform traditionally has a strong focus on mobility - and so has its business logic. Resco mobile apps include some business logic out-of-the-box, they can reuse/import some of the logic from the server, and they support also very powerful custom logic, both no-code (via the Rules editor) and JavaScript (via Resco JavaScript Bridge).

In some scenarios, however, it is preferable to perform automation directly on the server. Dynamics and Salesforce servers come with their own business logic solutions. In this article, we will discuss server-side business logic options in Resco Cloud. Processes are managed using the Admin Console.

The backend business logic is triggered at the data level - in your Resco Cloud organization, not in the mobile app. You can use this for example when you have several forms/views for one entity and you want to trigger an action when that entity changes. If you did that in the mobile app, you would have to write such logic in each form/view. If you trigger this action server-side, you write the logic once and you can be sure the action happens. You can also send emails from the server (if you set up a mail server), trigger push notifications, run plugins, etc.

When creating a new process, select one of the following types or categories:

What can start a process

Workflows and real-time workflows are always related to a particular entity. They can be triggered:

Jobs are not related to an entity. Instead, you can directly configure when to start the process:

Additionally, jobs and workflows can be executed from a different process. The job or workflow must be created before you can use it. You may iterate the same process, but it must be saved first. The number of iteration is limited to 8192.

What can a process do

The series of commands that a process performs is written using a user interface similar to the rules editor: 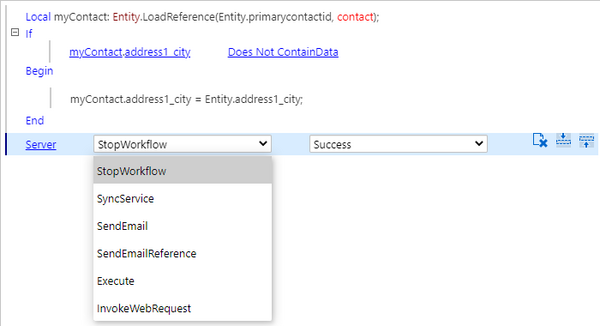 If your process includes a string variable, you can access additional built-in plugins:

If you are interested in some examples, consider starting a trial for a resco.FieldService organization. It comes with several processes preconfigured.

It is possible to use the OperationName parameter to distinguish which operation triggered the workflow. There are 3 values defined: “Changed”, “Created”, “Deleted”. 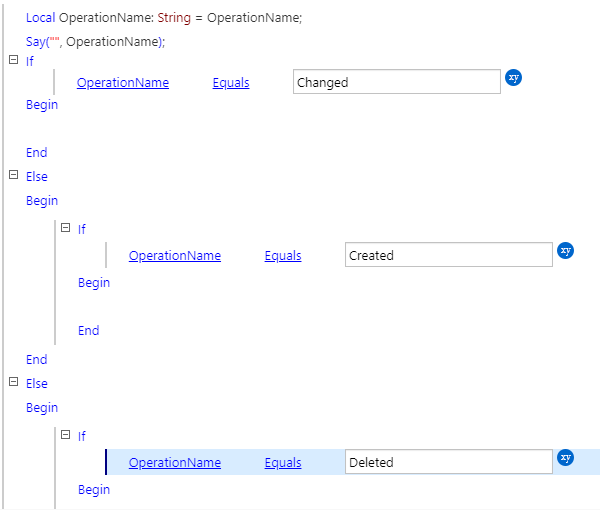 For workflows and jobs, you can also select the transaction mode:

This section offers insight into how processes and plugins are executed on the server.

A transaction is the propagation of one or more changes to the database. It is a sequence of operations performed as a single logical unit of work against a database and accomplished in a logical order.

Resco servers use standard Microsoft SQL Server as their database engine. Every backend process, such as workflow, job, or real-time process, is defined as a single operation performed against this database.

Jobs are scheduled, trigger-independent operations and in case the data isolation and consistency are secured, several jobs can possibly run at the same time on Resco Cloud. Even when server-side processes are designed in a manner that workflows and real-time processes are not interfering, there are cases, when concurrent data access may occur, and it is very important to ensure data integrity.

The transaction locks block other transactions from modifying the data in a way that would cause problems for the prior transaction requesting the lock. Each transaction frees its locks when it is completed with either a COMMIT or ROLLBACK statement.

A server-side plugin runs (as other server-side processes) also in a single transaction and this transaction is locking the corresponding resources according to the defined isolation level. That’s the reason why plugin assemblies in general are not designed for reading and modifying tens or hundreds of records. In that case, the plugin might be fetching and updating records for several minutes and you may temporarily undesirably lock your database.

Modification of a multitude of records should be handled rather via external services, so you’re able to fetch records separately and only after modifying them, update data to the server. In that case, you avoid the plugin assembly and transaction locks completely.

Another option is to count on this limitation and execute plugin once a day via scheduled jobs, possibly during the time when temporarily database locking would not cause any major issue.

Alternatively, you can use fetch operations with “NoLock” parameter to allow at least dirty reads during transactions within your plugin.